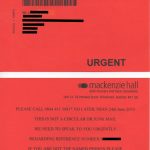 Debt collectors are to be banned from harassing debtors via social networking sites such as Facebook and Twitter.

“The OFT (Office of Fair Trading) has today published its updated Debt Collection Guidance which sets out the standards expected of all businesses engaging in the recovery of consumer credit debts, including banks, law firms and tracing agents as well as traditional debt collectors.

It also sets out specific business practices that the OFT considers to be unfair or improper, such as using Facebook and Twitter and other social networking sites to contact debtors, as well as contacting debtors at unreasonable times, or at inappropriate locations, for example when they are a patient in hospital.  Further reading here OFT website.

……..acting in a way likely to be publicly embarrassing to the debtor,
either deliberately or negligently (that is to say, through lack of
care)
For example:
• using postcards, or other correspondence, or leaving answer
phone messages (

including via interactive voice messaging
(IVM)36) in a way which may disclose to someone other than
the intended recipient the involvement of a debt recovery
business
• asking others to pass on messages to debtors, and in so
doing potentially revealing to them that the intended
recipients of such messages are being pursued for repayment
of debts
• posting messages on social networking sites in a way that
might potentially reveal that an identifiable person is being
pursued for the repayment of a debt.”

So, what can debt collectors do? What rights do you have? It’s always useful to be prepared, so why not have a look at this ‘Dealing with a debt collector’ fact sheet. The flow chart within the fact sheet outlines the possible steps you could take if you are contacted by a debt collector.

I think this is the sort of postcard that the OFT are talking about.