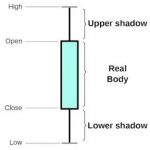 How To Use Candlestick Charts In Forex Trading

If you’re trading the currency markets, one of the first things you’ll encounter are different types of charts you can use. These include line charts, bar charts, and candlesticks. Many traders prefer using candlesticks when they conduct market analysis because they provide a pictorial display of supply and demand. They also indicate the trend of the market by showing the force behind the moves and finally, they sometimes provide clues on imminent reversals in a short duration.

What is a candlestick chart?

The first candlestick charts were developed by the Japanese in 1800s. They were mostly used in the trading of rice futures. Traders realized although supply and demand influenced prices, the traders’ emotions also influenced the price. A candlestick is made up of three parts, which are the body and the upper and lower shadows. During a bull market situation, the upper shadow represents the high of the day, and the lower shadow represents the low of the day. The body is the difference between the open and closing price.

When using the candlestick strategy, as a trader you can use different patterns to decide your entry and exit prices.

The opposite of the evening star is the morning star, which is viewed as a bullish signal. It often occurs when the trend is moving downwards. For this, the first big bearish candle is formed, and is followed by a small bullish candle and then a big bullish candle. An example of this is seen in the daily chart of USD/CAD pair below.

Next, there is the hammer candlestick pattern. Open, high, and close prices are usually the same price. At the same time, there is usually a long lower shadow, that is often twice the length of the body. When this happens, it is usually viewed as a bullish signal that that the price will rise. An example of this is the hammer pattern in the USD/JPY pair shown below.

The next pattern is the hanging man. As the name suggests, this is usually a bearish signal that happens after a period of bullish movements. Like the hammer, it is created when the open, high, and close prices are at the same price. Also, there is a long lower shadow that is usually twice the length of the real body. An example of the hanging man candlestick pattern is shown in the gold chart shown below. In summary, it forms when there is an uptrend, followed by a gap up, a lower shadow that is at least twice the size of the real body, a bearish candle, and a confirmation one.

While these are the most common candlestick patterns, there are others that are common with traders. They are Doji, Harami, Shooting Star, Windows, Piercing Pattern, and Gravestone Doji among others. If you want to learn more about these patterns, it is recommended that you read The Candlestick Course by Steve Nison. Also, it is recommended that you first use a demo account with your forex broker to test the performance of the patterns, before you try trading with them for real.