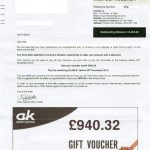 Here is a letter (Click on Letter to Enlarge) that someone recently received from Aktiv Kapital offering a £940 discount off their debt of £6.268. On the face of it, this would seem like a very reasonable offer from Aktiv Kapital. Maybe in some cases getting a £940 discount if you settle a debt fairly swiftly is good value. However, there are a number of things that I would take into consideration.

How Much is Debt Purchased For?

It would be interesting to know how much Aktiv Kapital paid Lloyds when they purchased to debt? A quick internet search reveals that for example, Arrow Global purchased debt portfolios with a value of £804.7m for £33.4m,  91% of which are underpinned by paying accounts. It is very difficult to kind out the exact figures, as debt companies are not keen to reveal this. Taken from here: http://www.credittoday.co.uk/article/15324/online-news/debt-portfolio-purchases-boost-arrow-global-results

So according to my calculations they paid about £0.04 in the pound for the debt. Actually it took me a very long time to work this out, I thought it was the large numbers that made my calculations wrong. So anyway I got it confirmed by two other sources and they came up with the same number; 04 (four) pence in the pound!

I would guess though that this price can vary?

Paying Off the Debt

I personally think that once you have been presented with an initial 15% discount, why not tell them that you can not afford this and make your own counter offer much lower? You can see that with a profit of £3760.19 they are being rather greedy. If you do negotiate you can come to much better figure that will still suite both parties.

Just remember, when negotiating make sure that you get it all in writing. It is also a good idea to pay via a third party for additional evidence of proof of payment.